Everything for peace Teatro degli Arcimboldi, Mailand (IT)

In the artists' dressing rooms, actors and actresses find peace before the performance. The Teatro degli Arcimboldi in Milan (IT) had these restored. The sound-insulating Geberit products in the bathroom also contribute to the atmosphere of silence.

Every theatre performance begins with a disguise. It is the first act behind the scenes – in the dressing room where artists transform into their characters. Here, they live for several hours, rest, feed and wash themselves, organise their thoughts and prepare their performance. A place of silence and concentration.

To create these oases of calm, the Teatro degli Arcimboldi in Milan commissioned interior design firms to redesign all the dressing rooms. In 2022, the Italian studio Calvi Ceschia Viganò took on the dressing room of the stars, called “Primo Camerino”.

Comfort in the service of art

After intensive discussions with the future wardrobe users, the designers created a semicircular room with a make-up and living area, a kitchen and a private bathroom. Soft, round lines dominate the design language and create a relaxed ambience. The colour concept skilfully manages to convey calm with a bright orange and a velvety petrol green.

In this instance, the “smallest room” is also the quiet room. The equipment of the bathroom follows the dictates of silence. A central aspect in the implementation of the bathroom environment was therefore sound insulation. That was the cue for Geberit. Behind the wall, the sound-insulated Geberit Silent-Pro and Silent-PP drainage systems reduce noise. In front of the wall, the toilet flush does its part: Thanks to the spiral movement of the water, TurboFlush technology significantly reduces noise during the flushing process. The simple design of the Geberit ONE bathroom series and the Olona shower tray fit harmoniously into the overall concept of an oasis of tranquility.

The bottom line? According to Italian actor and comedian Antonio Albanese, they are “the most beautiful dressing rooms, the most surprising ones I have ever seen. You absolutely have to visit them.” 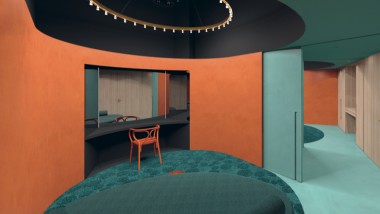 The designers skilfully combine bright orange with a velvety petrol green in the stars’ dressing room.

The simple design concept with sanitary ceramics from Geberit ensures calm and harmony in the bathroom.

A place for concentration: The bathroom comes with solutions in front of and behind the wall that reduce noise.