Hair can quickly clog the shower and washbasin drains. A great way to resolve this is with a good old rubber suction cup or plunger, as it’s also known. This loosens the obstruction and flushes the remains into the sewage system.

Incidentally, ‘trap’ is the term the general public would generally use, whereas sanitary professionals call it a water seal. And that’s exactly what it’s designed to do: trap or seal away unpleasant odours and prevent them from getting into the bathroom. We present two of the best-known variants of the water seal in the form of the bottle trap and the space-saving tubular trap, as used in the bathroom washbasin or in the kitchen, for example. 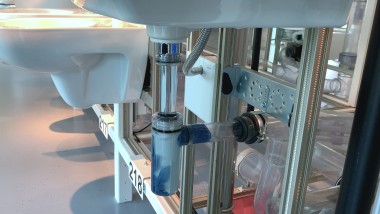 1. The bottle trap is clogged. We simulated this in the laboratory with a solid blue paper towel. The blockage can be seen in the trap and drain.

2. It is essential to rectify the situation if the obstruction – also known professionally as a blockage – is so severe that the water starts backing up in the washbasin. The best thing to use is the good old plunger or rubber suction cup. 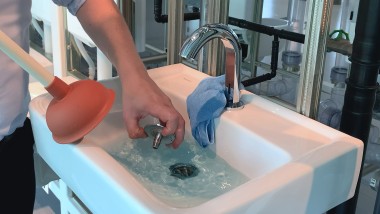 3. First, remove the drain cover from the drain.

4. Cover the overflow hole with your hand and a cloth to allow pressure to build up. This is created by the rubber suction cup placed on the drain. 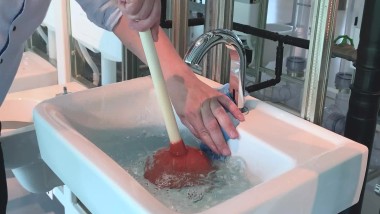 5. The suction cup is moved vigorously up and down to loosen the blockage.

6. The blockage comes loose and is flushed away.

7. The water drains out of the washbasin and the pipe is free again.

8. If the rubber suction cup doesn’t help, contact a sanitary professional. A professional uses a pressure pipe cleaner with a larger capacity. This is capable of removing almost all blockages. However, if it does not help, the easiest thing to do is replace the trap.
Find out more about cleanliness 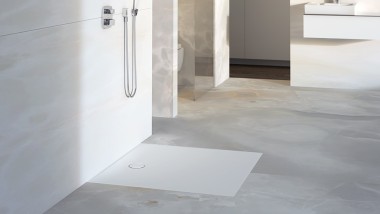 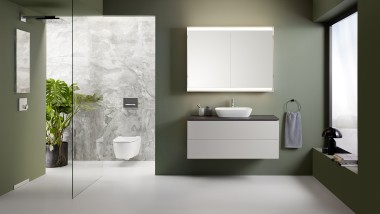 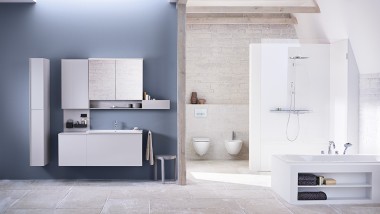 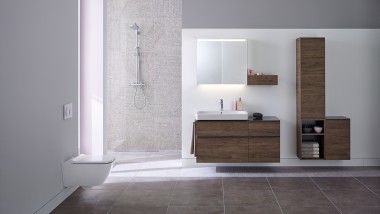